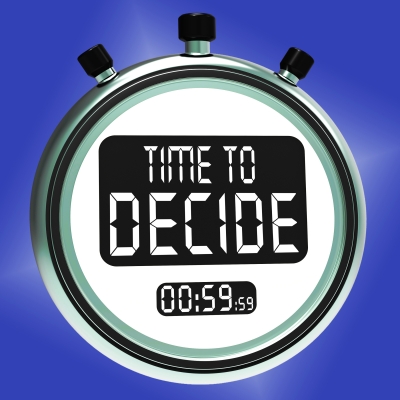 From time to time we all need to take our time, step back from our current situation, and make a big decision. Sometimes it is a new career path, business decision, life changing direction, get married or have children. To make a big decision is rarely easy. It is a decision-making process that cannot be solved for one or two days. However, many of us experienced when decision-making process was limited by a short period. It usually has been accompanied with a lot of stress that additionally put pressure on this complex process. According to several studies, the decision-making process is extremely difficult under stress. Stress makes us think different than usual. When in stress, we operate in a mode that induces dopamine, a hormone that affects our ability to think rationally. The studies show that when stressed men are more prone to take a risk and see a positive outcome, ignoring the facts that point to other, less favorable result. On the other hand, women tend to play safer when under the stress. Some psychologists think that we become too emotional when we are stressed. Namely, a high level of stress puts amygdala into work, which is interested in our survival. It is responsible for our fight or flee response. Therefore, we become affected with highly charged emotions and unable to make the right decision. To find out more about how to make a big decision, the article “Four Tricks to Help You Make Any Difficult Decision” gives us the following suggestions.

In my own case, I certainly reached that point of information overload where I had too many facts and opinions in front of me. Cutting some of that out helped. Instead of talking with a bunch of friends I kept it to just a few whom I trust.

The other big realization I had with both bigger and smaller choices was that my decision was always reversible. With a lot of our decisions, we put more weight on them than they’re worth. Yes, moving across the country to a new place is a big deal, but it’s also totally reversible. If it sucks, you move again. Likewise, with most smaller decisions, setting up a two minute rule to make the choice gets it out of the way so we can move on. Most decisions we make don’t matter as much as we think they do, and recognizing that helps keep the amount of information you take in to a minimum.

According to Eckhart Tolle, to make a big decision without stress, we need to collect all the facts. Sometimes it can be enough. But, in many cases, we will need to lean on our intuition and mix the two together. He warns us to be careful about intuition and does not replace emotional or ego impulse for our intuitive knowledge. To do so, embracing the present moment will help us calm down and let the solution appear.

Tags: How to Make a Big Decision