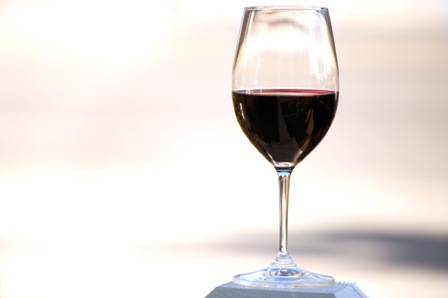 We all know that the wine has beneficial effects on our health, when it is consumed moderately. For men, moderately means one or two 4-ounce glasses of wine per day. The one study, conducted on a group of men with a high cardiovascular risk, at the University of Barcelona in Spain, showed that the red wine has very positive effects on men’s health. However, the effects of the two groups of men who consumed red wine and non-alcoholic red wine was the same, thus suggesting that the alcohol contained in a red wine has nothing to do with reducing the risk of cardiovascular diseases. The article “Red Wine: To Your Health!” points out that flavonoids and resveratrol are the very substance with the high positive impact on our health.

• Flavonoids are antioxidant compounds found in plants. In red wine, the main type of flavonoid is anthocyanin, a substance found in the skin of the grape that produces the deep purple-red color of the wine.

• Resveratrol is a compound produced by plants to help them ward off fungal infections and other disease. It belongs to the class of antioxidants known as polyphenols.

Your choice of red wine can make a difference. Cabernet Sauvignon contains the most antioxidants, followed closely by Petite Sirah and Pinot Noir. Merlots and red zinfandels have some antioxidants, but fewer than the other wines.

Furthermore, the article lists the significant benefits the wine has on the men’s health:

• Reduction in heart disease. Flavonoids in red wine are believed to decrease the amount of “bad” cholesterol in your bloodstream and increase “good” cholesterol. Flavonoids and resveratrol also seem to prevent platelets from sticking together, which can prevent heart attack or stroke by decreasing the risk of clot formation.

• Protection against cancer. Resveratrol has been shown to reduce tumor incidence and inhibit growth of cancer cells in the laboratory. Studies have begun to directly link red wine consumption to reduction of cancer risk in humans. For example, research has shown that a glass of red wine a day can cut a man’s risk of prostate cancer in half, particularly when it comes to the most aggressive types of prostate cancer. More than that, however, could have the opposite effect and actually increase your risk for certain cancers, so don’t use this as an excuse to down half a bottle of your favorite pinot.

• Protection against neurological disorders. Researchers have found that resveratrol can help block the formation of amyloid plaques which are thought to damage brain cells and contribute to Alzheimer’s disease. Another study found that resveratrol actually aided in the formation of new nerve cells, which could help prevent neurological disorders like Alzheimer’s and Parkinson’s disease.

• Other health benefits. Doctors continue to find new ways in which the antioxidant effects of red wine benefit the body. For example, researchers have found that red wine cuts down on the inflammation and tissue damage caused by periodontal, or gum, disease. So drinking red wine actually can help your dental health, they say.

Regardless of the positive effect the red wine has on our health in general, doctors warn us about the recommended quantities, because the other extreme in consuming the wine can have much greater consequences for our health. There is an evidence of Alcohol Concern that at least one in four men and one in seven women drink more than prescribed daily quantities. Although, the wine is rich in protective substances, too much alcohol in general, leads to a completely different area of health problems – from brain damage to other harmful diseases. Having that in mind, it is not very hard to learn to drink smart.

Tags: Is Wine Really That Good for Your Health?