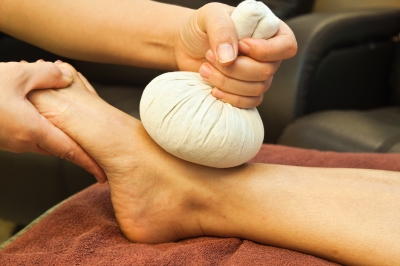 Image courtesy of satit_srihin at FreeDigitalPhotos.net

Background
Reflexology aims to prevent or treat health conditions through the application of pressure to specific points reflexes on the feet. The underlying idea of reflexology is that areas of the feet correspond to other parts of the body, and by stimulating those areas; you can heal and detoxify any part of the body.  Becoming more common these days is to also apply pressure to the hands, ears and even the face.

Reflexology and many similar treatments have been used for thousands of years in places like China, Thailand, India and Egypt.  It wasn’t until the early 20th century, when an American physician named William Fitzgerald suggested that the foot be “mapped” to other areas of the body to diagnose and treat medical conditions.  This process was originally called zone therapy. He strategically divided the body into 10 zones, each zone representing a different organ or body system. He then proposed that gentle pressure on a particular area of the foot could relieve pain, tension and promote healing in the targeted zone.

In the 1930s, a nurse and physiotherapist named Eunice Ingham, further developed these maps to include specific reflex points. It was at that time that zone therapy was renamed reflexology and the name has stuck ever since. Modern reflexology charts include pictures of the feet with diagrams of corresponding internal organs or parts of the body. The right side of the body is represented in the right foot, and the left side, in the left foot. Reflexology is used by a vast array of health care providers today, such as massage therapists, chiropractors, podiatrists, physical therapists and even nurse practitioners.

The Theory
The theories behind reflexology have not been proven.  However case studies do produce convincing evidence that the therapy is effective.  One proposal, begun by the ancient Chinese, is that the body contains an invisible life force, or energy field, represented by meridians, that when blocked result in sickness.  The Chinese believe that stimulation of the foot and nerves can unblock and increase the flow of vital energy to various parts of the body, which promotes healing. Other theories include the release of endorphins, which are natural pain killers produced by the body, stimulation of nerve circuits in the body, and the promotion of lymphatic flow or the dissolving of uric acid crystals.

The Practice
Your therapy session will begin with a questionnaire or one on one question and answer session.  This is, of course to get your personal history and determine where your therapy should be most concentrated.  For example, if you are going in suffering from frequent migraines and neck pain, your reflexologist will concentrate on the areas of the feet and sometimes the hands, in areas that deal with the head and neck.  Of course, you will be treated in all areas of the feet.  In order to bring your body to a state of well-being, you must detoxify your organs and this is exactly what happens during reflexology therapy.

After the initial interview, your ears, feet and hands will probably be thoroughly looked over for discolorations and tender spots.  According to the theories reflexology stems from, these things can be warning signs that correlating body parts are not functioning, as they should.

At this point the therapy will begin.  It will usually start with rubbing of the ears, hands or feet and then will turn into pressing.  It closely mimics acupuncture, but without needles.  By pressing in certain areas of the feet, hands and even the ears, the brain will send signals and release neurochemicals to stop pain and relieve tension.

Probably one of the biggest expectations is the relaxation factor.  It is true; you will become very relaxed during the therapy.  Believe it or not, some people even fall asleep.  It is one of the single most powerful ways to relax and eliminate stress in your body.

Tags: The History of Reflexology