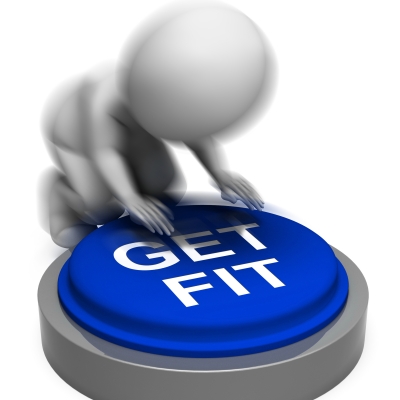 There appear to be many variations but the best one I have come cross for people who do not generally have the time to exercise properly is one that involves a high burst (on an exercise bike) for twenty seconds followed by 2 minutes of medium peddling, repeated three times and the exercise then repeated again every other day. So basically 1 minute of high intensity a day three times a week!

Here is some background:-

There is no specific formula to HIIT. Depending on your level of cardiovascular development, the moderate-level intensity can be as slow as walking.[4] The original protocol set a 2:1 ratio of work to recovery periods, for example, 30–40 seconds of hard sprinting alternated with 15–20 seconds of jogging or walking.
The entire HIIT session may last between ten and thirty minutes, meaning that it is considered to be an excellent way to maximize a workout that is limited on time.[5]

Tabata regime
An early version of HIIT was based on a 1996 study by Professor Izumi Tabata et al. initially involving Olympic speedskaters, uses 20 seconds of ultra-intense exercise (at an intensity of about 170% of VO2max) followed by 10 seconds of rest, repeated continuously for 4 minutes (8 cycles). The exercise was performed on a mechanically braked cycle ergometer. Tabata called this the IE1 protocol.[9] In the original study, athletes using this method trained 4 times per week, plus another day of steady-state training, and obtained gains similar to a group of athletes who did steady state (70% VO2max) training 5 times per week. The steady state group had a higher VO2max at the end (from 52 to 57 ml/kg/min), but the Tabata group had started lower and gained more overall (from 48 to 55 ml/kg/min). Also, only the Tabata group had gained anaerobic capacity benefits.

Gibala regimes
Professor Martin Gibala and his team at McMaster University in Canada have been researching high-intensity exercise for several years. Their 2009 study on students[10] uses 3 minutes for warming up, then 60 seconds of intense exercise (at 95% of VO2max) followed by 75 seconds of rest, repeated for 8–12 cycles. Subjects using this method trained 3 times per week, and obtained gains similar to what would be expected from subjects who did steady state (50–70% VO2max) training five times per week. While still a demanding form of training, this exercise protocol could be used by the general public with nothing more than an average exercise bike.
Gibala’s group published a less intense version of their regime in a 2011 paper in Medicine & Science in Sports & Exercise. This was intended as a gentler option for sedentary people who had done no exercise for over a year. It included 3 minutes of warm-up, 10 repetitions of 60-second bursts at 60% peak power (80- 95% of heart rate reserve) each followed by 60 seconds of recovery, and then a 5-minute cool-down.

Timmons regime
Jamie Timmons, professor of ageing biology at the University of Birmingham, is a proponent of a few short bursts of flat-out intensity. In a BBC Horizon programme in February 2012, he put Michael J. Mosley on an exercise bike regime consisting of three bursts of about 2 minutes gentle pedalling followed by 20 seconds of cycling flat-out. This was done three times a week for a total of 3 minutes of intense exercise per week, plus some warm-up and recovery time. Measurable health benefits were reported, including significantly improved insulin sensitivity.”

It appears that scientific research has proved that high intensity interval training does work and maybe a beneficial as normal training.