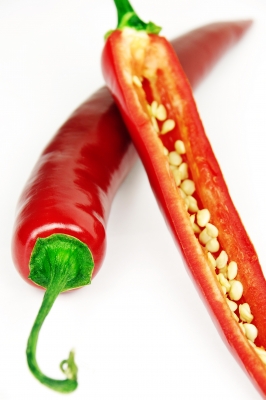 Image courtesy of Paul at FreeDigitalPhotos.net

Chili peppers had been unknown in European countries for centuries. They had lain hidden from the rest of the world until Christopher Columbus arrived in America. With the help of Spanish and Portuguese navigators, chili peppers were transported to other parts of the world, where they were quickly incorporated in local cuisines. On the other hand, this spicy food had been one of the essential ingredients of Mexican cuisine since 3.500 BC. Even before Mexicans began cultivating chili peppers, the plant has been used as a medicine, spice, and a cure that can prevent from witchcraft. According to ethnologists, Aztecs and Mayas had consumed it and the plant had been known in South America from 7.000 BC. Aztecs and Mayas had used chili peppers to heal the body, help with colds and cure depression. Since then, we have cultivated a great number of cultivars that differ among themselves by their shape, color and intensity. A substance that gives chili peppers hot flavor and pungency is capsaicin. Its intensity is measured by a scale that has established by American pharmacist Wilbur Scoville and is reported in Scoville heat units (SHU). The scale extends from 0 scores for sweet bell pepper to 500,000 SHU for habaneros. To learn more about chili peppers and their health benefits, the article “Hot Peppers & Their Health Benefits” lists the most common ones.

1. Fight Cancer A study published in Cancer Research found that capsaicin caused cancer cells to commit suicide. The substance caused almost 80 percent of
prostate cancer cells to die in mice, and prostate tumors treated with capsaicin were about one-fifth the size of those in untreated mice.

2. Provide Pain Relief A topical form of capsaicin is a recognized treatment for osteoarthritis pain, and may also help alleviate pain from diabetic neuropathy.

3. Prevent Sinusitis and Relieve Congestion Capsaicin has potent antibacterial properties that fight and prevent chronic sinus infections, or sinusitis. Because
it is so hot, it also helps to stimulate secretions that help clear mucus from your nose, thereby relieving nasal congestion. This phytochemical may also
help relieve sinus-related allergy symptoms.

4. Fight Inflammation Capsaicin is a potent anti-inflammatory agent. It works by inhibiting Substance P, which is associated with inflammatory processes.
Capsaicin is being looked at as a potential treatment for arthritis, psoriasis and diabetic neuropathy.

5. Soothe Intestinal Diseases A Duke University study found that capsaicin may lead to a cure for inflammatory bowel disease (IBD). The substance can also help
to kill bacteria such as H. pylori, which can help prevent stomach ulcers.

6. Burn Fat and Lose Weight Capsaicin is a thermogenic agent, which means it increases metabolic activity. This, in turn, helps to burn calories and fat. Many
popular “fat-burning” supplements on the market contain capsaicin, as the substance may significantly increase metabolic activity for over 20 minutes after
it’s eaten.

7. Protect Your Heart Capsaicin may help to protect the heart by reducing cholesterol, triglycerides and platelet aggregation.

As we have seen, chili peppers have shown as beneficial in heart disease prevention. They have the ability to dissolve blood clots and decrease LDL or “bad” cholesterol. Interestingly, the countries where people consume chili peppers the most are low in the scale of cardiovascular diseases. Chili peppers also contain free radicals that significantly decrease cholesterol and triglycerides. Their most beneficial substance is capsaicin. The hotter chili peppers are, the bigger is the level of capsaicin and the healthier they are. It is good to know that red chili peppers are richer in vitamins and minerals than the green ones. To benefit from their use, their everyday consumption can make miracles.