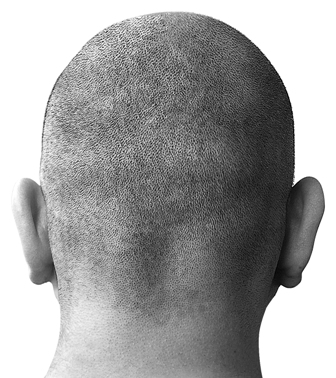 According to statistics, men baldness hits sooner or later, nearly 70% of men. Although, for some men baldness is not an issue, for younger men or the men who build their self-esteem on their good-looks, it can become a huge problem. Although, many men are not prone to discuss their emotions about the process of balding, emotional changes are present in most cases. A whole range of negative emotions can appear, such as shame and embarrassment, especially in a phase when a man refuses to accept baldness. If a man starts perceive himself as less confident or less attractive it is a time to change this perception and work hard on returning self-confidence. The article “The Art of Balding” offers interesting insights and ideas that can help men cope better with baldness.

Avy Joseph, a psychologist and the co-founder of the College For Cognitive Behavioural Hypnotherapy, agrees. “Certainly for some men it is an acute source of anxiety, and it can have a huge impact upon a man’s emotional state,” he tells ShortList. “The amount of hair on your head is supposedly linked to your attractiveness, your virility and your masculinity, but the reality is very different. It comes down to your perception of what other people think of you, and to what extent that impacts upon your self worth. Some men ‘catastrophise’ the situation, whereas others accept themselves and what’s happening to them as a man.”

So, we’re back to the sex thing. There’s only one man who can get this back on track: Bruce Willis. In 2005, he said, “I don’t make a big deal out of it. Whether you’re a man or not comes from your heart, not from how much hair you have on your head,” before revealing that he shaves his head to make a statement against companies selling hair-growth products. “It’s my f*ck-you to all those ads that say that you’re not a real man if you’re losing your hair or if your hair is thinning. I get so many compliments from guys who say thank you for championing this look.”
There’s little doubt that Willis’s close-cropped look has done a lot for the self respect of balding men. And it could even be argued that he encouraged men of a certain age to reject thinning hair as the inexorable first stage of their physical demise — in the days before Moonlighting and Die Hard, balding men resigned themselves to the comb-over, and the beer gut soon followed.

Jay Davies is 35, and shaves his balding pate to the scalp. “I first started losing my hair when I was 25, and for a while I thought that I could fight it,” he explains. “I would wear caps, brush my fringe forward a bit… But after a while I just thought, ‘F*ck it. I’m a man. Men go bald. People will just have to deal with it.’ And they do. It’s not as if I’ve got a disease or a disfigurement. Looking back, I think that I hyped myself up too much about it. I thought that when I finally shaved it off, it’d be a shock, but it really wasn’t — we all had crew cuts when we were kids, and it made me look a bit younger,if anything.”

Which brings us back to the ‘acceptance’ that psychologist Avy Joseph was talking about earlier. “The reality,” he explains, “is that some people will find you more attractive or judge you in a more positive way, while for others the opposite will be true. It’s just how it is. Accept yourself unconditionally for who you are, with or without hair. You need to put yourself out there socially and at work, and make a concerted effort to go against the negative feelings you may have. You need to desensitise yourself; behave as if you don’t have a problem with it and, gradually, you won’t. And better still, once you’ve accepted it, you’ll eventually come to view baldness as a positive thing.”

Acceptance, as the main step in coping with baldness, means that a man has to accept himself as who he really is. When it comes to attractiveness, it is not that baldness does not matter, it is rather about confidence. If a man fails to accept himself thoroughly and completely with all that hair-loss stuff, he cannot reach enough confidence. Unfortunately, the lack of self-esteem is not attractive to anyone. Instead of hiding the baldness issue, it might be much wiser to find a stylish hair cut for certain type of baldness, try out this new image and show up. There are famous male sexy icons out there like Bruce Willis, Jude Law, and Sean Connery that their baldness does not reject their female fans.

Tags: How to Cope with Baldness