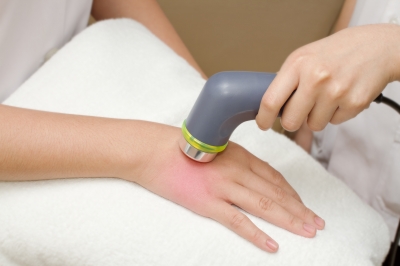 It is known that enzymes control cell activity. The most important enzyme for making DNA, and so for the growth of any cell, is ribonucleotide reductase, which building blocks of DNA. This enzyme is heavily involved in the growth of cancerous cells, so a lot of research has gone into creating drugs to use in chemotherapy to target just this one enzyme. So far there has not been much success.

Electrotherapy takes a different approach, using the fact that within the enzyme there is a free radical (a single electron) that is essential for the enzyme’s activity. It is known that free radicals can be disabled, or neutralized, by sending a mild direct electric current through the tissue involved. Given that the concentration of the target enzyme is much higher in cancerous cells than in healthy cells, a gentle direct current (DC) acts selectively on malignant growth.

While this application of electrotherapy to deactivate cancerous cells is a relatively new idea, using small DC charges to treat tumor are quite well known, although in earlier times the reasons for success were not always understood. Knowing what we do today, we can see that the reported results of earlier procedures are consistent with deactivation of ribonucleotide reductase. A study published in the prominent journal Cancer Research as long ago as 1985 reported 98 per cent reduction in the tumor mass of lab animals.

Electrotherapy is an alternative cancer treatment that is non-toxic and is potentially much less expensive than traditional treatments. The scientific basis of the treatment is well understood.

Using the correct levels of amperage and voltage, and the correct duration, a doctor can make all the biological changes in human tissue that are required for the treatment of each case. Because the patient receives only a mild electric current, there is no exposure to any toxic strain.

Electrical currents administered at around nine volts forms fibrous connective tissue and leads to the neutralization of malignancy. Fibroblasts and fibrocytes are the repairing components involved in fibrosis caused by the galvanic current. Malignant tumors treated with electric current display a change in their electrical charge. Part of the cancer cells deteriorate and disappear almost immediately – sometimes they dissolve gradually in a relatively short time.

Details of how the treatment is administered vary slightly from one practitioner to another. The maindifference is whether the electric current is applied directly to the skin, or via needles inserted into the skin (under a local anesthetic, which is applied first).

Electrotherapy, sometimes known as galvanotherapy or Percutaneous Bio-Electrotherapy (PBE) is available throughout Europe and in Mexico, but is not generally available in North America.