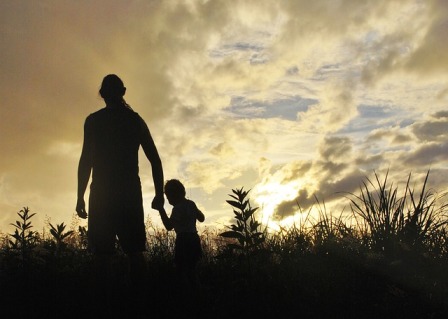 Many children today grow up in single-mother households. According to statistics, one in four children grows up in families without a father. And there are, also, a significant number of children, living in families with both parents, where the father is emotionally absent or focuses only on the provider’s role. It is not surprising that 70% of Americans think that too many children, raising without father’s role, contributes to increasing of social problems. Moreover, in the last 200 years father’s role has been gradually losing its authority and causing lack of direction for today’s fathers. Despite this, psychologists agree that the father’s role these days is more important than ever. They emphasize the significance of their role in teaching the children how the world is functioning, how to make connections with other people in a masculine way, how to take risks, play, explore new things, develop a sense of adventure, and build self-confidence. In other words, the role of a father can engage many positive capabilities and aspiration of a man to show to his son what it means to live his masculinity. The article “The Importance of Fathers” points at the results of a research of the fathers’ impact on their children that can help us understand how being a dad can help a man to express his masculinity.

What does the research say these days? According to a report in “Fathers and Their Impact on Children’s Well-Being”:
“Even from birth, children who have an involved father are more likely to be emotionally secure, be confident to explore their surroundings, and, as they grow older, have better social connections.

The way fathers play with their children also has an important impact on a child’s emotional and social development. Fathers spend a higher percentage of their one-to-one interactions with infants and preschoolers in stimulating, playful activity than do mothers. From these interactions, children learn how to regulate their feelings and behavior.

Children with involved, caring fathers have better educational outcomes. The influence of a father’s involvement extends into adolescence and young adulthood. Numerous studies find that an active and nurturing style of fathering is associated with better verbal skills, intellectual functioning, and academic achievement among adolescents.”

As we have seen, the role of father is crucial to children’s development, no matter what their gender is. Being a dad, especially a good one, requires a lot of love, energy, patience, and evolution of the man’s personality. However, if the man has a difficult relationship with his father, full of anger, resentment, and rage, this task will be extremely hard, even unattainable. For this reason, it can be a good idea for a man to invest his time to listen with compassion a story of his father. It can help him understand specific challenges, failures, and a lack of capabilities when confronting with them. That could be a way to forgiveness and letting go of resentments. Without releasing hard feelings from the past, especially if they are rooted in the relationship with his father, he could not be able to express his masculinity in a positive way. It can also hinder his efforts to set him as a good example for his children.

Tags: Being a Dad Is a Great Opportunity to Express Masculinity