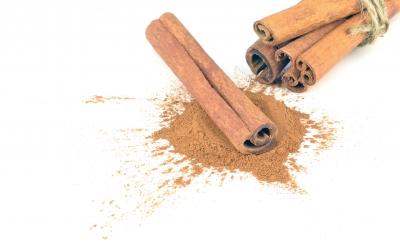 Cinnamon was once highly compelling spice for hot beverages and cakes, which aroma was spreading around through the cold winter nights. Its popularity had reached its peak in ancient Egypt, where it had been valued like gold. The Egyptians had not used cinnamon as spice only, but also for embalming. They also had recognized its health benefits. Cinnamon was one of the first spices that come to Europe from the Near East. In Medieval Europe, cinnamon was used as a cure for many illnesses, such as cold, flu and arthritis. It comes in two varieties: as Ceylon cinnamon, which is cultivated in Sri Lanka, Madagascar, the Caribbean, India and Brazil; and as Cassia cinnamon, which grows in Indonesia, China, and Vietnam. Ceylon cinnamon is known as “true” cinnamon, and it does not carry any risk of toxicity. However, the second type, also known as Cassia, can cause problems when taken regularly or in larger doses, because of its ingredient – coumarin. Coumarin can affect the liver and for that reason, Cassia cinnamon is not recommended for people with any liver disease. To avoid the risk of coumarin toxicity, it is better to restrict the use of cinnamon to Ceylon sort. To find out more about its health benefits, the article “Cinnamon, Ground” describes the most important ones.

Cinnamaldehyde (also called cinnamic aldehyde) has been well-researched for its effects on blood platelets. Platelets are constituents of blood that are meant to clump together under emergency circumstances (like physical injury) as a way to stop bleeding, but under normal circumstances, they can make blood flow inadequate if they clump together too much. The cinnaldehyde in cinnamon helps prevent unwanted clumping of blood platelets.

Cinnamon’s essential oils also qualify it as an “anti-microbial” food, and cinnamon has been studied for its ability to help stop the growth of bacteria as well as fungi, including the commonly problematic yeast Candida. In laboratory tests, growth of yeasts that were resistant to the commonly used anti-fungal medication fluconazole was often (though not always) stopped by cinnamon extracts.

Cinnamon may also significantly help people with type 2 diabetes improve their ability to respond to insulin, thus normalizing their blood sugar levels. Both test tube and animal studies have shown that compounds in cinnamon not only stimulate insulin receptors, but also inhibit an enzyme that inactivates them, thus significantly increasing cells’ ability to use glucose. Studies to confirm cinnamon’s beneficial actions in humans are currently underway with the most recent report coming from researchers from the US Agricultural Research Service, who have shown that less than half a teaspoon per day of cinnamon reduces blood sugar levels in persons with type 2 diabetes.

Not only does consuming cinnamon improve the body’s ability to utilize blood sugar, but just smelling the wonderful odor of this sweet spice boosts brain activity!

In addition to its unique essential oils, cinnamon is an excellent source of fiber and the trace mineral manganese while also a very good source of calcium. The combination of calcium and fiber in cinnamon is important and can be helpful for the prevention of several different conditions. Both calcium and fiber can bind to bile salts and help remove them from the body. By removing bile, fiber helps to prevent the damage that certain bile salts can cause to colon cells, thereby reducing the risk of colon cancer. In addition, when bile is removed by fiber, the body must break down cholesterol in order to make new bile. This process can help to lower high cholesterol levels, which can be helpful in preventing atherosclerosis and heart disease. For sufferers of irritable bowel syndrome, the fiber in cinnamon may also provide relief from constipation or diarrhea.

Apart from quoted health benefits, cinnamon is very effective in fighting LDL or “bad” cholesterol. According to studies, it can reduce LDL cholesterol and triglycerides, not affecting HDL or “good” cholesterol. Some researchers have found out cinnamon positive effects with inflammation, multiple sclerosis, and chronic wounds. In traditional medicine, cinnamon has been used in treating cold and flu. According to experts, it is because of cinnamon’s antioxidant properties. This delicious spice is rich in nutrients such as iron, calcium, dietary fiber, and manganese. Due to its active substances, cinnamon belongs to healthiest spices. To benefit the most of its powerful effects, nutritionists suggest consuming 1/2 to 1 tablespoon per day.