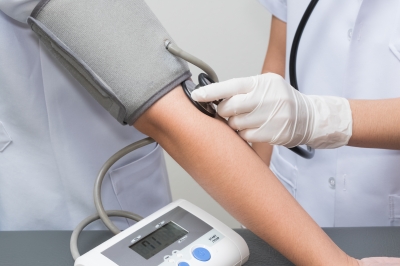 It is generally accepted that a certain amount of exercise is good for us, and a recent article confirms the idea that you can control your blood pressure with moderate exercise.

“Charles Darwin may have declared survival the prerogative of the fittest. But a new study in Hypertension has found that when it comes to preventing high blood pressure, inching your way up to merely “moderate” levels of fitness can still boost your odds considerably.”

“Researchers at the Veterans Affairs Medical Center focused on guys suffering from so-called pre-hypertension—with the top number of their blood pressure between 120 and 139, and the bottom number between 80 and 89. Some 39 per cent of American men (nearly double the number of American women) fall into this category.”

The lead researcher, Peter Kokkinos, Ph.D., is a professor at Georgetown and George Washington University School of Medicine, and said that the problem can start in men as young as 30. According to the article:

“Other researchers have documented that 40 per cent of those with pre-hypertension eventually progress to the full-blown variety, significantly jacking their risk of heart attacks, strokes, and premature death.”

The conclusion from the research was as follows:

“Moderately-fit men, on the other hand, enjoyed almost as many benefits as those in the high-fit group.”

“You must do enough to see benefits. But above this point, you’ll eventually reach a plateau where doing more won’t add much.”

The article concludes by saying:

“Bottom line: Men who spend 20 to 40 minutes of brisk walking or slow jogging five or six days per week will see almost as many benefits as those who exercise considerably more. Additional exercise may help you be fitter or lose more weight, of course. But it won’t protect any further against hypertension.”

It is extremely encouraging for most of us to find out that we don’t need to thrash ourselves hard in the gym to get the health benefits of exercise. Most people could fit in half an hour’s brisk walking, swimming, tennis, or jogging each day without upsetting their schedule too much, and would be likely to feel fitter as a result, as well as reducing their risk for cardiovascular disease. In the light of the facts there seems little reason why you should not try to control your blood pressure with moderate exercise.