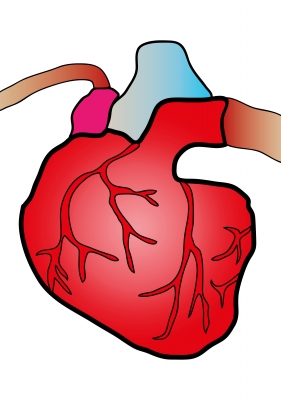 Image courtesy of xedos4 at FreeDigitalPhotos.net

Cholesterol is a critically important compound in the human body. It is synthesized in the liver and used to manufacture bile, hormones, and nerve tissue. High levels of cholesterol have been linked to heart disease.

Cholesterol occurs in almost all living organisms with the primary exception of microorganisms. About 93% of the cholesterol found in the body occurs in cells. The remainder occurs in the circulatory system. The brain and spinal cord are particularly rich in the compound. About 10% of the former’s dry weight is due to cholesterol. An important commercial source of cholesterol is spinal fluid taken from cattle. In addition, cholesterol is found in myelin, the material that surrounds nerve strands. Gallstones are nearly pure cholesterol.

How one’s body processes cholesterol is affected by both hereditary factors and diet. For most people, when the dietary intake of cholesterol greatly exceeds the body’s needs, excess cholesterol will tend to precipitate out of blood and be deposited on arterial linings. The presence of such plaques (clumps) of cholesterol can lead to circulatory disorders such as heart disease. The concentration of cholesterol in human blood also varies rather widely, from a low of less than 200 mg/dL (milligrams per deciliter) to a high of more than 300 mg/dL.

Children of any age can be tested to determine the levels of cholesterol in their blood. In fact, many pediatricians believe testing should take place routinely at about ages 2 and 16. Because many children carry the genetic tendency toward high cholesterol levels and heart disease, such screening can pinpoint children early who could benefit from dietary changes. It has recommended that children older than two follow the same nutritional guidelines as adults, eating no more than 30% of their daily calories from fat and only a small percentage of that from saturated fat. Before the age of two, a higher percentage of calories from fat is required to sustain the rapid growth characteristic of this stage of development.