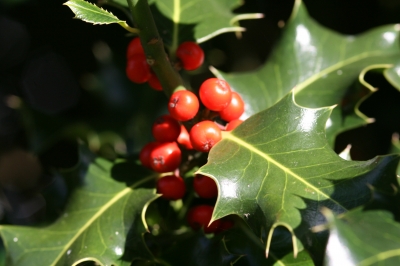 Certain plants, mostly berries like cranberries, raspberries and strawberries or nuts such as pecans and walnuts, but including other fruits and vegetables, notably pomegranates, are rich in a polyphenol antioxidant called ellagic acid. Some supporters claim ellagic acid may be one the most potent ways to fight cancer, because it inhibits the growth of cancer cells and arrests the growth of those cells in persons with a genetic predisposition for the disease.

The properties of ellagic acid first attracted attention in the 1970s, but serious investigations began in the 1990s, and are continuing. Ellagic acid

* is also a potent anti-carcinogen

* has the ability to inhibit mutations within a cell’s DNA, and

* is also a cancer inhibitor with the ability to cause apoptosis, or normal cell death, in cancer cells.

It also has antibacterial and anti-viral properties.

Almost all these investigations have been done in cell cultures or laboratory animals, although some larger trials are also reported below. Clinical Tests on cultured human cells show that ellagic acid prevents the destruction of the p53 gene by cancer cells. Further studies have suggested ellagic acid inhibits mutagenesis and carcinogenesis by masking binding sites to be occupied by the mutagen or carcinogen. Studies using laboratory animals showed that ellagic acid can inhibit growth of carcinogen-caused tumors of the skin, esophagus and lung. This research is supported by a double blind study on a group of 500 cervical cancer patients conducted by the Hollings Cancer Institute at the University of South Carolina. Other positive effects have also been found, including one recent study in cell cultures that found ellagic acid may act against substances that allow tumors to form new blood vessels.

Unpublished research at the Hollings Cancer Center is said to show that one cup of raspberries per week will stop prostate cancer growth for a period of up to one week. Associated studies reveal that ellagic acid from red raspberries is readily absorbed through the gastrointestinal tract.

* prevents the development of cells infected with human papilloma virus (HPV), which is linked to cervical cancer, and

Dr. Daniel Nixon, of the Medical University of South Carolina has stated that ellagic acid, “is known to inhibit certain carcinogen-induced cancers and may have other preventive properties.” Dr. Nixon studied the effects of ellagic acid on cervical carcinoma cells. He found that ellagic acid stopped tumor growth in the laboratory after a couple of days and induced apoptosis.

The apoptotic process, triggered by the antioxidant ellagitannin, also has beneficial effects on breast, esophageal, lung, and skin cancer (melanoma). The antiproliferative properties of ellagic acid are thought to be the result of its ability to directly inhibit the DNA binding of certain carcinogens, including nitrosamines and polycyclic aromatic hydrocarbons.

Further research into how ellagic works was published on 21 June 2008 in the World Journal of Gastroenterology. The research team, led by Dr. Edderkaoui from West Los Angeles VA Healthcare Center, showed ellagic acid increases programmed cell death and decreases proliferation of pancreatic cancer cells. The study showed that ellagic acid causes cell death by decreasing the activity of the pro-survival transcription factor NF-kB. The results presented in this article show for the first time how this polyphenol regulates cancer cell proliferation and resistance to death.

Heating, freezing and concentration processing does not affect the potency of ellagic acid. Therefore it can be consumed as fresh fruit or nuts, in juices, fruit spreads, preserves or sorbets, and is a beneficial part of any healthy diet.