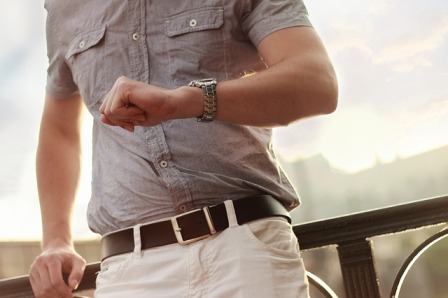 Since the beginning of time, humans were amazed and intrigued by the concept of time. Time has been always considered as a category that is not under the human’s domain. We have no control of it. It might be that wearing a watch in our contemporary time, especially a nice one, gives us some impression of mastering the time. And if we are successful in managing the time, we surely have control of our own life. We live in society where business success is highly valued, and the wristwatch can suggest that we do not waste our time. It sends a message of our efficiency and deep appreciation of our and other’s time. A nice, luxuries watch place emphasis on our values – we value efficiency, respect the time and are ready to spend a lot of money to prove it. Apart from that, many people consider luxury watch as status symbol, not so obvious as a nice car, but more subtle and intelligent. Whatever the reason might be, many men indeed like wearing a nice watch, which reflects their personality and a good taste. The article “What Your Watch Says about You” lists famous watch brands and gives us the link between the brand choice and the man’s personality.

Timex:
Timex is an all-American brand, founded in Waterbury, Connecticut, in the 19th century. While most of its movements are now made in Asia, the company was really a leader in American horology and, as such, still garners a lot of respect. Allegiances with the likes of J.Crewand a dose of military-inspired designs have helped make it hip again, and its Originals Collection is getting a lot of love right now. Timex is a cool brand for someone looking for a bit of history without the big dollar signs.

Casio:
There are two sides to Casio: If you are wearing one of its Pathfinders it means you are an active guy who loves spending time outdoors, and you just want a watch that gets the job done. But, if you wear that same pathfinder with a shirt and tie, you’re just a man who doesn’t know how to dress.
Then there is the entire Casio G-Shock line. The G-Shock is about as good as it gets when it comes to digital timepieces — devised in the early ‘80s by being dropped out of a bathroom window at Casio HQ — it really is the original rugged timepiece. But, they have evolved into a cultural phenomena, with celebrities and rappers wearing the biggest and brightest G-Shocks they can get their hands on. So, depending on who you are, the G-Shock is either a purist’s take on a “go anywhere” timepiece, or it’s just a piece of fashion. Wear a Casio for the right reasons. And by no means should one be paired with a suit, under any circumstances.

Rolex:
Wearing a Rolex watch can go one of two ways, and it’s all about how you present your timepiece. A Rolex can be an understated, timeless and incredibly masculine accessory — if you don’t go around throwing it in everyone’s face. Those that wear a Rolex — and want people to know it — will be seen as such, and that’s worse than pairing a Casio with a Brioni suit. Wear a Rolex proudly, do a little research into why the brand has become the most powerful in the world, and think of it as merely an extension of your own self. If you put the Rolex on a pedestal and showboat, you’ll come across just like most people who wear a Rolex — like a used car salesman.

IWC:
Men that choose to wear an IWC have done so very consciously. You can be sure they considered a Rolex and thought it too gaudy. IWC, with its rich history of tool watches, is the thinking man’s luxury timepiece. They are rugged, classic and dependable, just like the men who wear them.
Patek Philippe: If you wear a Patek Philippe, you do what you want, when you want. Considered the reigning king of the watch world, Patek Philippe wearers tend to be captains of industry, tycoons and, if a little younger, legacy members of the Skull and Bones at Yale. This is a power player’s watch, and despite their timid size and slim nature, you will be recognized and instantly revered in a Patek.

Swatch:
The Swatch is an enigma. It is at once a hipster’s best friend, seen on the wrist of countless tight-jean wearing, ironic mustache-donning “musicians” in Williamsburg, and the very watch that saved the Swiss watch industry. When quartz was king in the 1980s, the ultra-thin Swatch, available in dozens of colors, brought the Swiss back to the top of the production market. Wearing a Swatch does give off a certain air of appreciation for history, and is often an artist’s choice for wristwear.

Tissot:
Tissot is a watch for men that can’t decide. Should they invest into a quality timepiece that they can pass on to their son, or should they listen to their mothers and “waste their money on something as silly as a watch?” Sure, some Tissots look nice enough, but you’re not going to impress anyone by wearing one. Frankly, you’d be better off just buying a Timex until you can afford to buy something mechanical that will last for decades.

For many men, wearing a classy, stylish, luxury watch expresses a desire to be socially accepted and valued as intelligent, tasteful and serious. In this way, the message is sent and has to communicate how professional, assertive and powerful is its owner, who understands well how important is the first impression in business world. During the years, the watch becomes some kind of men’s accessory or jewelry that help men to express their uniqueness likewise a stylish and classy female jewelry says something about a woman. This is the most socially accepted men’s jewelry, which not only speaks about man’s success in a business world, but highlights his masculinity and attractiveness. So, why not to wear it?

Tags: What Type of Watch to Wear?