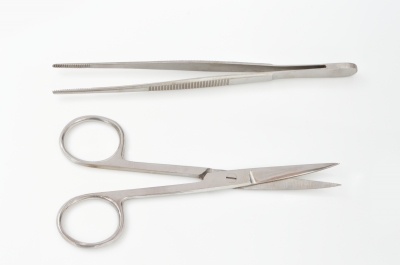 Image courtesy of arztsamui at FreeDigitalPhotos.net

Diverticulitis develops when bacteria becomes trapped in pouches called diverticula that have formed along the wall of the large intestine. This leads to an infection. The bacteria grow and cause inflammation and pressure which may lead to a small tear in the wall of the intestine. The infection, called peritonitis, may develop if infection spills into the abdominal cavity. The reason diverticula form in the wall of the large intestine is not completely understood. Typically, a diet with adequate fiber produces stool that is bulky and can easily move throughout the colon. A diet low in fiber requires the colon to exert more pressure than usual to move small and hard stools. A low fiber diet can also increase the time the stool remains in the bowel, which adds to the high pressure.

Overall, less than 10% of people with diverticulitis require surgery. Surgical treatment involves removing the diseased part of the large intestine, called a partial colostomy, and reconnecting the remaining parts. Depending on both the severity and nature of the symptoms, more than one surgery may be required to correct the problem. When multiple surgeries are required, the person usually has a colostomy between surgeries. A colostomy is a surgical procedure in which the upper portion of the intestine is sewn to an opening made in the skin of the abdomen. Stool passes out of the body through this opening and into a disposable bag. The colostomy is then removed and the intestine is reconnected at a later date.

No screening is available at this time for diverticulitis. Starting at age 40, a procedure called a flexible sigmoidoscopy may be recommended every 3 to 5 years or a colonoscopy every 10 years as a screening exam for cancers of the colon and rectum. Both flexible sigmoidoscopy and colonoscopy involve using a flexible tube with a lighted viewing instrument to see inside the large intestine. These exams are often able to reveal diverticula if they are present. Treatment after recovery from an attack of diverticulitis is aimed at preventing another attack. This treatment may include getting plenty of fluids daily, gradually increasing the amount of fiber in the diet through fruits, vegetables, wheat bran, and the regular use of a fiber supplement. It is also highly recommended that regular doctor visits are conducted to monitor the condition.