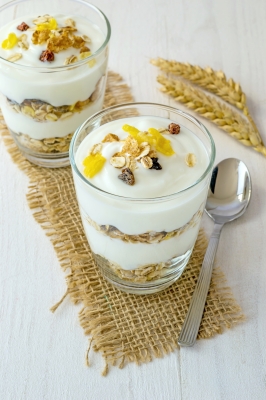 Methods This randomized, double-blind, placebo-controlled trial involved 49 IBS patients (probiotics: 25, placebo: 24) diagnosed according to the Rome III criteria. Patients were randomly assigned to two groups: either to receive multispecies probiotics (a mixture of Bifidobacterium longum, B. bifidum, B. lactis, Lactobacillus acidophilus, L. rhamnosus, andStreptococcus thermophilus ) twice a day for 4 weeks or to receive a placebo twice a day for 4 weeks. The primary efficacy end-point was the proportion of participants whose IBS symptoms were substantially relieved at week 4. Secondary end-points were the intensity of abdominal pain/discomfort, bloating, stool frequency/consistency, alterations in fecal microflora over the 4 weeks. Fecal microflora were analyzed in 34 patients (probiotics: 17, placebo: 17) by quantitative real-time polymerase chain reaction assays.

Even though probiotics showed their positive impact on gastrointestinal flora in patients with IBS, there are a significant number of patients that do not react on probiotics. According to researchers, patients with symptoms such as diarrhea and constipation have a far better chance to experience the benefits of probiotics‘ activities. They can benefit not only from probiotic supplements but also from foods that contain probiotics. One of the most beneficial foods for IBS is yogurt. However, many patients with IBS can react negatively to this type of food, because of lactose and casein, yogurt’s protein. Consequently, experts suggest fermented food that showed even better than yogurt in practice. As with the majority of diseases, the IBS also represents a call for huge changes for a patient on various levels. Sometimes, the changes are necessary to affect the patient’s lifestyle, sometimes include adjustments in a diet, and frequently, influence our inner level of peace and happiness. The most often, necessity of changes encompasses all these areas.